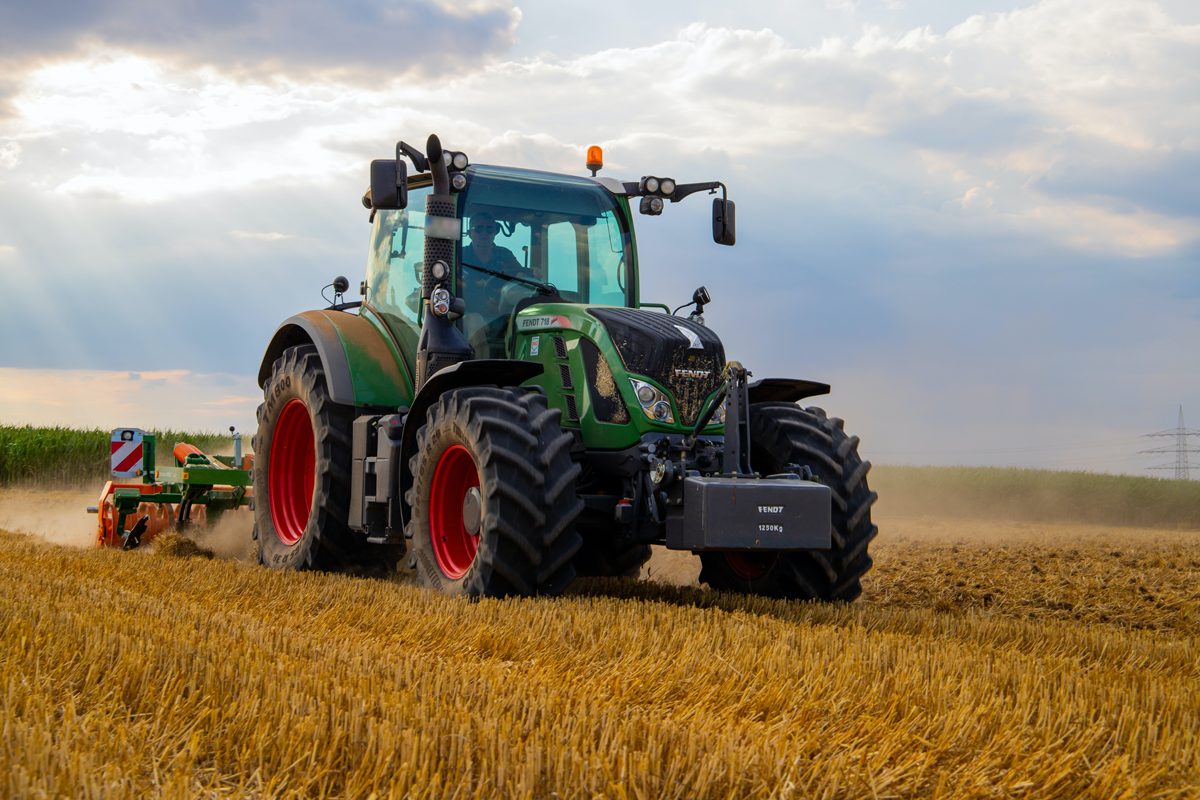 Rising crime is causing financial and psychological impact to Ireland's rural communities. How do you protect your business?

Media coverage of the current cost of living crisis and fuel price hikes has focussed predominantly on urban environments, but the rapidly increasing cost of oil has also led to a surge in crime in rural and agricultural communities across Ireland.

An estimated 1.1 million homes use an oil-fired heating system, accounting for around a quarter of all off-grid properties. With the conflict in Ukraine causing wholesale oil prices to double in less than a month, many families, and businesses, elected to stockpile oil reserves to avoid paying more should the price skyrocket further. This, in turn, has led to rich pickings for thieves looking to profit by stealing the fuel before reselling it on the black market.

Some of these thefts are simply opportunistic, but An Garda Síochána are concerned there is also an increase in organised crime groups targeting rural areas, using the motorway network to enable a swift escape and consolidation of their stockpile.

Even before the pandemic, the combination of tools, machinery, vehicles, and fuel accounted for 69 percent of agricultural theft across Ireland. Fuel and oils alone make up nearly a quarter of thefts, and this isn’t just because of their rapidly increasing value.

Fuel remains a prime target because it’s relatively easy to steal, and very hard to trace. Thieves are targeting oil tanks naturally, but they also target fuel in cars, tractors, and other agricultural machinery, syphoning it off before transporting and reselling. Cooking oil too, believe it or not, is a target, with the Garda advising restaurants and takeaways to secure their stocks of both used and fresh oil before closing up for the night.

Indeed, night-time, especially during the winter months, is the most common time for thieves to strike, but recent trends suggest that fuel theft is also becoming an increasingly year-round problem. The simplicity of a pipe and a canister make syphoning a quick and easy way to steal with minimal exposure under cover of darkness, while more sophisticated (if somewhat noisier) pumping systems can empty a full tank of oil in just a matter of minutes.

With the rising price of oil, these tanks can cost thousands of Euros to refill as well as increasing the likelihood that farmers and other rural businesses or homeowners may look to confront any intruders, and they too are more likely to resort to violence. Earlier this year two pensioners were attacked and injured in separate incidents after they tackled thieves on their property and in both cases, the perpetrators were known to have links to organised crime groups based in Dublin.

An Garda Síochána have also started clamping down on sheep-rustlers after seizing two flocks they believed to be stolen, in a joint operation with the Department of Agriculture Special Investigation Unit. A number of farmers in Donegal have reported sheep missing over the last few months, with one reporting in March that two-thirds of his flock of 60 sheep had gone missing. Stealing 60 sheep does not happen in the space of seconds, a swift detection of the intruders could have stopped this devastating incident quickly.

This rise in theft and violence is more than just a headache or an inconvenience – it threatens the very existence of such businesses and homes. Replacing a full tank of fuel to keep the heating on or machinery running could easily spell the end for a small agricultural business, or cost homeowners money they simply don’t have as the cost of living crisis continues to bite.

The psychological impact, too, should not be underestimated. A home invasion or burglary is arguably one of the most traumatic and stressful experiences many people will experience, and research from Allianz Insurance found that it takes around eight months for victims of theft or burglary to feel secure in their home again, while less than half of people ever truly feel secure again. For farmers, almost always living on their land, this means that a threat or theft against their business, also impacts on a visceral personal level.

Following the recent attacks on pensioners and the overall increase in rural crime, one councillor said a number of her constituents had reached out expressing heightened feelings of anxiety:

“We don’t want to be living in fear in our houses”, they told her.

The councillor also commented in an interview with The Independent: “It resonates with people when you hear of somebody living a peaceful life being attacked.”

“We do have strong community gardaí, but resourcing has been an issue that some people have focused on in the area.”

The Garda’s resources have been an ongoing concern for rural communities for several years. The last economic downturn led to the closure of over 130 Garda stations across rural Ireland, and the vast majority remain closed, despite a pilot project in 2017 leading to some reopening.

According to The Journal, many criminal gangs are aware of the deficits in police coverage across the country and are targetting those areas specifically.

In 2019 the Irish Farmers’ Association (IFA) challenged the Garda Síochána’s assertion that rural crime was falling, saying that instead the crimes were simply not being reported. Following the attacks earlier this year, as well as the uptick in overall crime, it has once again called for greater policing visibility in rural areas to act as a deterrent – particularly against gangs.

In February, Brendan O’Connor, Vice President of the Garda Representative Association, told The Journal: “Policing in rural Ireland has been in decline for over a decade now.

“The decision to close Garda stations and downgrade District Headquarters marked the beginning of a decline that has continued ever since.

“While the association believes every station and unit needs to be properly staffed and resourced, it is unfortunately the case that rural locations tend to lose out in the allocation of finite resources.

“We have seen a decline in the numbers of sworn members in recent times and this again impacts disproportionately on rural locations, as local managers try to maintain a reactionary fire brigade policing service with less gardaí.

The IFA’s deputy president, Brian Rushe, said: “We will be encouraging the farming community to provide whatever help they can to support the work of the gardaí. Apprehending those responsible requires a coordinated response.”

“Nobody should feel under threat in their own home. These attacks bring fear into the community. It takes away that sense of comfort and that’s a real loss. People who have been living in the same place their whole life suddenly don’t feel safe there and that itself is a tragedy.”

The coordinated response Rushe mentioned will take time to come together, but there have already been moves towards making it happen, with the IFA and members of the National Rural Safety Forum joining An Garda Síochána for a National Community Engagement Day at the end of April.

The event provided a countrywide opportunity for communities to express their security and safety concerns to Garda representatives and for both sides to discuss opportunities for collaboration to reduce crime and the fear of crime, as well as offer crime prevention advice.

How to protect your business from fuel theft

Ensure your fuel tank is situated is fenced, in a well-lit area and locked at all times.
Fuel Floats will alert you via your smart phone to a theft (or a leak!) but won’t deter the criminals as there is no alert that signifies to them that the incursion has been detected.

Good quality CCTV may help you catch the criminals after the event, and should deter some criminals when combined with clear signage, but the key to limiting loss and theft is to make sure the thieves know they have been detected, and make them fear an immediate response before they can finish syphoning off fuel and escape.

The best defence against fuel theft is an Active Deterrent Camera System.
As soon as the virtual fence around the tank/ machine is breached a loud siren sounds, and red and blue flashing lights are triggered; effectively it’s an alarm and a camera in one.
Pre-recorded messages, or a live interaction from an ARC monitoring centre, quickly warns the intruders that they have been detected and an immediate response has being actioned. Active deterrent CCTV systems can also be used to ringfence expensive plant machinery. Cutting edge AI has reduced false alarms and only humans and vehicles will cause an activation, so no need to worry about errant livestock or foliage!

This will stop the majority of criminals in their tracks before they get to your fuel tanks and start syphoning off, thereby vastly reducing your risk of damage and loss.

Any CCTV or intruder alarm system must be installed by an accredited security installer, licensed by the PSA. Your Security Consultant with advise you of the best system to protect your business. Professional installation and ongoing maintenance and care ensures your security system will work when you need it most.

Get a free security audit of your site

Almas Industries have been protecting Irish businesses for over 17 years, we’re PSA accredited for your compliance and guarantee of great quality installation and service.

Get in touch today for a free security audit or quote. You can call us on 01 68 333 68 or simply email us to [email protected] and your local security consultant will get in touch.

Over 500 rural crimes committed in Ireland every month.

Protect your business and home with Active Deterrent CCTV; these new CCTV cameras also act as an alarm, with a loud siren and flashing blue and red lights. 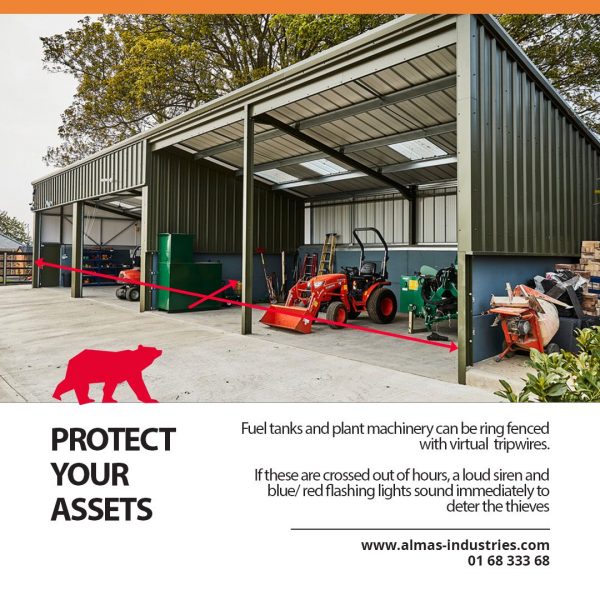